Beating the Deadline: Reminders to Apply for Financial Aid on Time

Undergraduate students and their parents were sent a sequence of eight behaviorally informed reminder emails that encouraged them to submit financial aid applications ahead of the priority deadline.

Sending reminder emails to students and their parents increased the timely submission of applications by 21 percentage points, from 29% to 50%.

The intervention cost $0.15 per student, at scale.

In the eight weeks leading up to the March 1 application deadline, ASU’s Financial Aid and Scholarship Service sent weekly reminder emails to selected continuing undergraduate students. Not only were the emails delivered more frequently than ASU’s standard practice of sending students a single email four weeks before the application deadline, they had also be redesigned. The new emails emphasized the priority filing deadline, encouraged students to talk with their parents about the financial information they would need, and included charts and graphs to make it easier to identify the application requirements. Redesigned emails also corrected the common misperception that most students don’t use financial aid, and encouraged students to approach the application process as a sequence of simple tasks instead of one complicated undertaking. 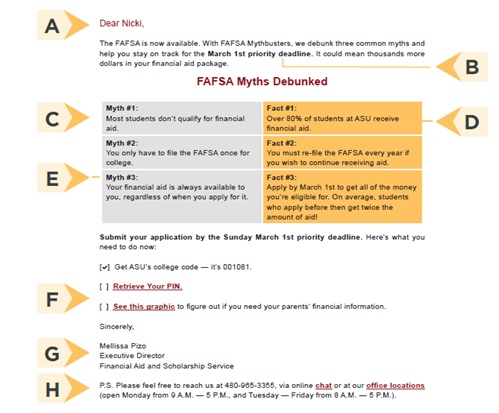 The first of eight redeigned emails

A. Personalized greeting may encourage readers to continue reading email

B. Increases salience of deadline through bolding and placement at top of email, making it more likely that students will notice it

D. Shows widespread use of financial aid so that students feel it is acceptable and normal for them to apply for and receive aid

H. Postscripts are among the top things that people read in letters or emails, and here we included several outreach options to make it easier to access help 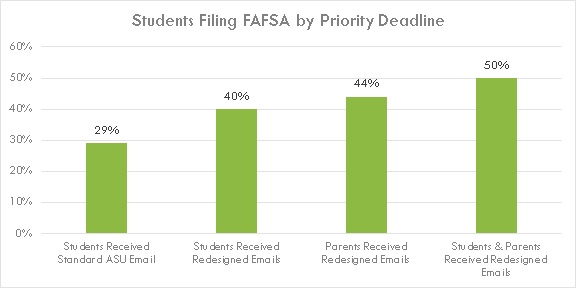