The cost was minimal for existing recruitment programs using posters.

As the Zambian government got ready to launch their Community Health Assistant (CHA) program in 2010, the Ministry of Health wanted to evaluate and adopt effective recruitment strategies for the new cadre. The Ministry’s goal was to train 5,000 new CHAs by 2017—a massive investment in a country with only 6,000 nurses.

Recruited from their communities, trained, and then deployed back to their communities, community health workers are thought to have the necessary relationships, local knowledge, and sense of community responsibility to deliver health services to underserved areas. Informal, small-scale, community health worker programs have existed for years, but recently many countries in Sub-Saharan Africa have sought to formalize the cadre and implement national programs at scale.

In each community, the district health authority posted paper advertisements for Community Health Assistant (CHA) jobs in public spaces, such as schools, churches, and the health center. 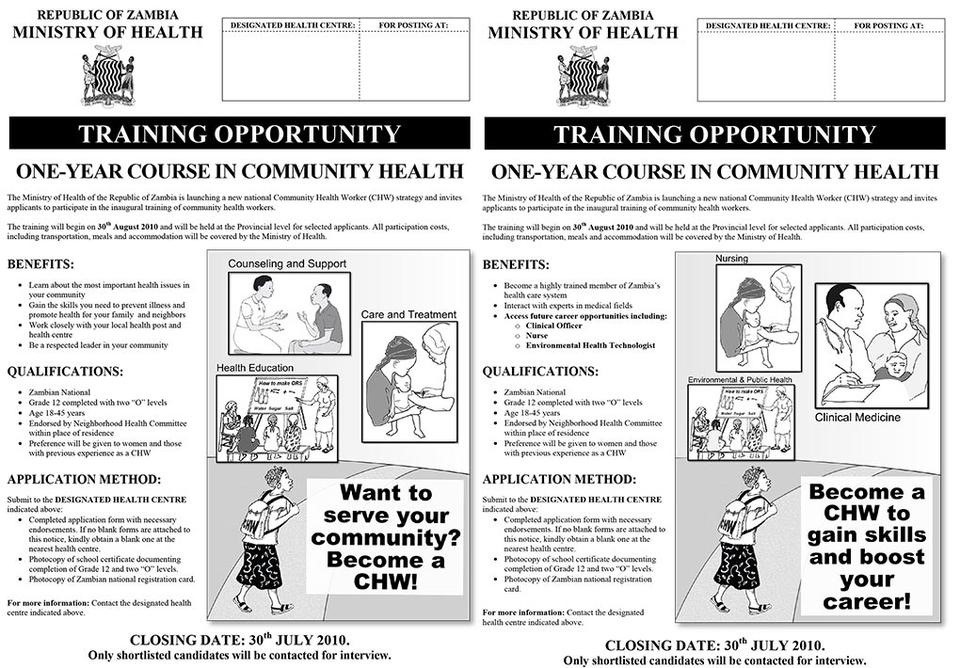 Additionally, the district health official received detailed instructions about the CHA recruitment process, including a script introducing the CHA position, a memo from the Health Secretary explaining the program, and application forms. The district health officials visited each health center and met with the staff and neighborhood health committee members to introduce the CHA program and begin recruitment using the script.

Like the posters, the scripts emphasized either career incentives—the opportunity to access higher-paid positions and “boost your career”—or the opportunity to serve the community. The latter was designed to make the position resemble existing community health workers jobs with NGOs.

CHAs were recruited from the communities where they would eventually work, trained together for one year in a central location, and posted back to their home communities after they finished their training. 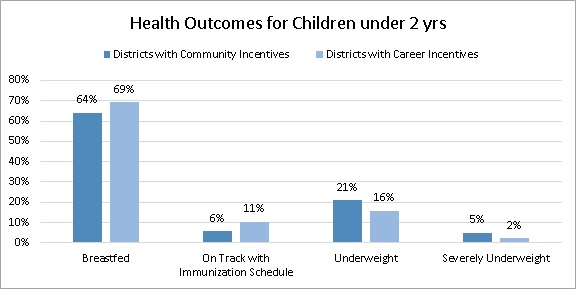 A randomized evaluation found that highlighting career incentives in the recruitment posters and scripts attracted higher-skilled, but still community-oriented candidates. These skills translated into better job performance and health improvements for community members.

While this specific approach for recruiting community health workers has only been tested in Zambia, the project indicates that highlighting career opportunities at the recruitment stage can draw in individuals who perform well in the health sector. Further, highlighting career opportunities does not seem to attract the “wrong” candidates for community health work—the career-incentivized CHAs were just as pro-socially motivated as the community-incentivized CHAs, but they accomplished more, leading to better health in their communities. Researchers believe that these lessons may be generalizable to other contexts where the same basic conditions apply:

Changing the emphasis of the recruitment materials should not add any cost to existing recruitment strategies and therefore may be a cost-effective way to attract more highly skilled candidates. In the longer run, however, costs might be higher if CHAs recruited with career incentives do indeed climb the career ladder and need to be replaced more frequently. Additional costs you are likely to encounter include:

Tools and resources for implementers

Script given to district health officials in the career-incentives group:

To Health center and Neighborhood Health Committee: I would like to you let you know about a new government program to strengthen the country’s health workforce. Applications are currently being accepted for a new Community Health Worker position. This is an opportunity for qualified Zambians to obtain employment and to advance their health careers. Opportunities for training to advance to positions such as Nurse and Clinical Officer may be available in the future. Successful applicants will receive 1 year of training, both theoretical and practical. All training costs, including transportation, meals and accommodation during the one-year training program, will be covered by the Ministry of Health. Please encourage all qualified persons to apply so that they can benefit from this promising career opportunity.

Script given to district health officials in the community incentives group:

To Health center and Neighborhood Health Committee: I would like to you let you know about a new government program to improve health care services in your community. Applications are currently being accepted for a new Community Health Worker position. This is an opportunity for local community members to become trained and serve the health needs of their community. The new CHWs will work at the Health Post and community level in coordination with an affiliated Health center. Successful applicants will receive 1 year of training, both theoretical and practical. All training costs, including transportation, meals and accommodation during the one-year training program, will be covered by the Ministry of Health. Please encourage all qualified persons to apply so that they can benefit from this promising community service opportunity.