Divide Money to Save More

To encourage savings, male workers in rural India were assigned a financial saving goal. Each week, savings were set aside from each worker’s wages and placed in one or two sealed envelopes, some of which were decorated with pictures of their children.

Separating earmarked money into two envelopes increased average total savings by 72% over placing money into only one envelope.

Saving money can be challenging, especially with limited access to financial institutions in rural areas. The World Bank estimates that as of 2014 only about half of Indian adults had an account at a financial institution and only 13% saved money there. Unsurprisingly, low-income households without access to banks save very little: the mean baseline savings rate observed by researchers was only 0.75%. Individuals who fail to save sufficient funds for their post-working years suffer from poverty and may end up using more public resources as a result. Therefore, researchers and policymakers are interested in designing ways to help people save more. Prior research suggests that earmarking money, or setting it aside for a specific purpose, increases self-control and promotes increased savings.

Male construction workers in rural India who agreed to receive financial planning services were given a portion of their weekly income in envelopes and instructed to treat the earmarked money as savings. Participants were randomly assigned either high savings targets (~12% of income) or low savings targets (~6% of income) by financial advisors during an initial home visit.

During weekly return visits, social workers set aside money from the workers’ wages equivalent to their target savings in either one envelope, or split equally into two envelopes, and noted whether any savings had been spent from prior weeks. These envelopes were either plain white or decorated with photos of the participants’ children. This process lasted 15 weeks at which point total savings were analyzed.

The condition where workers received two envelopes and pictures of their children displayed the greatest savings. The interaction between partitioning and photos of children is illustrated below: 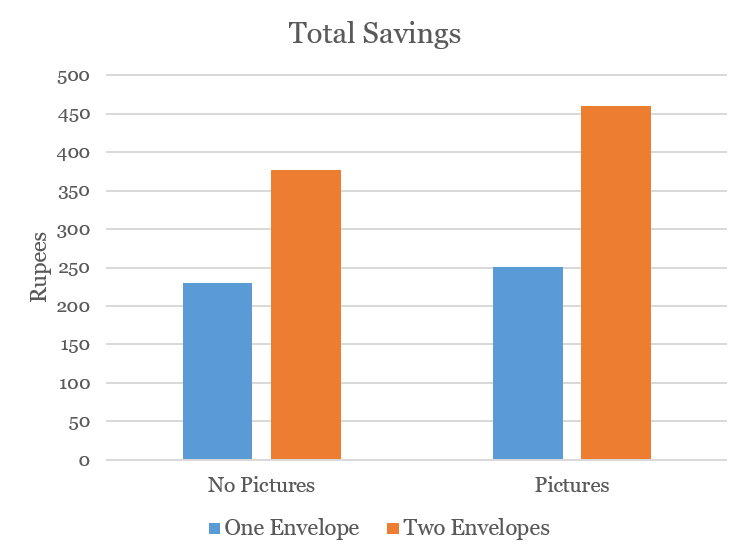 Would this work elsewhere? Prior research suggests that earmarking increases self-control; results of this study may be generalizable where the following conditions also exist: