Incoming San Francisco State University freshmen watched a video of peers describing challenges in college life and strategies to overcome them. Students then completed a survey and were sent 11 personalized email and text messages based on their responses. The messages offered both encouragement and administrative reminders.

Personalized messages about belonging sent to college freshmen at risk of attrition increased their likelihood of remaining enrolled for a second year by 8 percentage points, from 83% to 91%.

This intervention cost $470 per Metro Academies student, at scale.

“Fostering a Sense of Belonging” in Nudging for Success: Using Behavioral Science to Improve the Postsecondary Student Journey. 2016.

“Fostering a Sense of Belonging” in Nudging for Success: Using Behavioral Science to Improve the Postsecondary Student Journey. 2016.

At San Francisco State University, 18% of students drop out by the end of their first year, mostly for reasons unrelated to their academic achievements. The goal was to increase the number of first-year college students returning for their second year.

To help first-year students understand that the challenges they faced were neither unique to them nor evidence of personal failure, all incoming first-year students at SF State were asked to watch a three-minute video in which older students described the struggles they had faced and their routes to success.

Incoming students were then asked to respond to a brief questionnaire that prompted them to relate the experiences shared in the video to their own values and goals. Here’s a sampling of some of the questions:

What was your biggest takeaway from the video?

a) There are many ways for me to get involved at SF State, like joining clubs or meeting with professors.

b) There are students like me who have found success at SF State.

c) Like other students at SF State, I will find my place on campus even if I struggle at first.

d) During my time at SF State, I can use challenges to learn and grow as a person.

3. Briefly explain a school-related challenge that you overcame, and how you did it. How did you grow from that experience? (150 words or less)

7. Take this opportunity to send your “future self” some advice for the year ahead. (140 characters or less) 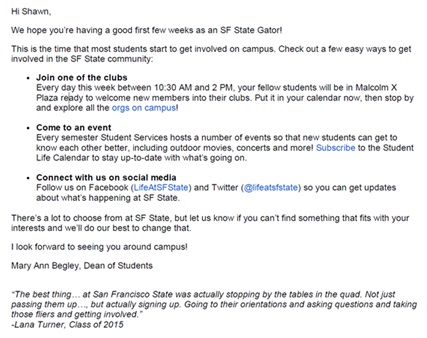 The first of 11 messages: Get involved!

Survey responses were used to craft 11 emails and text-messages. Half of the university’s 6,406 incoming students were randomly selected to receive the messages: throughout the academic year, these students received one message each month. The messages reminded students of important deadlines for class registration and financial aid, repeated students’ own encouraging words back to them, and highlighted their personal goals and aspirations at high-pressure moments like exam periods.

The final text-message – A word of encouragement 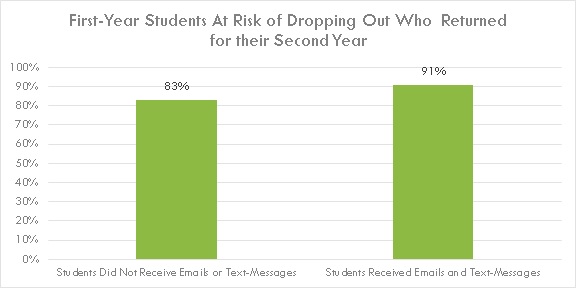 Impact: 302 students at risk of dropping out were randomly assigned to receive or not receive social belonging messages

The messages were only effective for students enrolled in SF State’s Metro Academies College Success program, which supports students identified as being at high risk of dropping out of college. Among these 302 first-year students, emails and texts which combined social-belonging messaging and administrative reminders increased the number of students returning for their second year by 8 percentage points, from 83% to 91%.

The messages also increased the average grade point average (GPA) of Metro Academies students from 2.7 to 2.88; and increased the average GPA of all minority students from 2.73 to 2.79, regardless of their Metro Academies status. However, the messages did not have an impact on student retention or GPA outside of these subgroups.

The interaction of the messaging intervention with the sustained support Metro students receive, including access to a community and personalized help, may account for lower attrition among Metro students. Furthermore, the reminders and messaging may also increase the efficacy of existing academic support programs.

Fostering a Sense of Belonging: Forming a New Narrative about Freshman Year. (2016).

“Fostering a Sense of Belonging” in Nudging for Success: Using Behavioral Science to Improve the Postsecondary Student Journey. (2016).