A small cash payment was paid out to families of school-aged children, not conditional on school attendance but explicitly labeled as an education support program.

Conditional cash transfers are funds given to households if they fulfill certain requirements, such as sending their children to school. These cash transfers can boost households’ investment in health and education; however, they are expensive, and it is often complicated to track and enforce compliance with the requirements. Removing the conditions may make cash transfer programs more cost effective by decreasing administrative costs, while still providing a nudge to increase school participation. 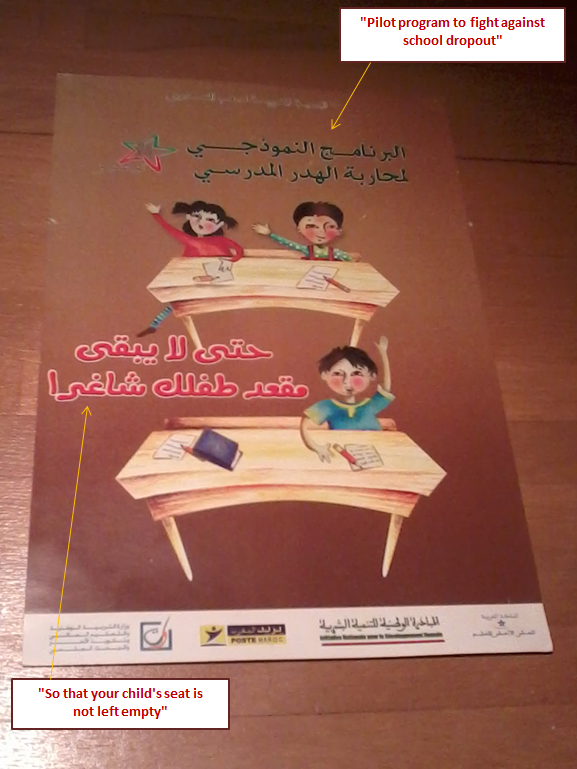 A flyer for the cash transfer program

The Moroccan Ministry of Education piloted a “labeled cash transfer” (LCT) program that made cash payments to parents of children aged 6 to 15 years. The program did not require that participants actually attend school in order to receive the payment, but the program’s features made it very clear that the program was linked to school attendance:

To reduce both the cost of determining program eligibility as well as any confusion that participants might feel about whether or not they qualified, all children in the participating school districts could enroll in the program.

The payments were much larger than a family’s yearly schooling expenditures, but smaller than most conditional cash transfers. The average payment represented 5 percent of the average monthly household consumption, but the range for most conditional cash transfers is between 6 and 27 percent of mean monthly household consumption.

Recipients received cash transfers at their local post office. About a third of participants, who lived in areas that did not have a post office, received the visit of a “mobile cashier” in charge of distributing the transfers.

This project was conducted in rural school districts in a middle-income country where school attendance is generally high at early ages, and where two common reasons for dropping out are financial difficulties and children’s lack of interest. Results indicate that small cash transfers without conditions, but with explicit labels tying them to education, can change parental perceptions and improve school retention. Researchers believe that these lessons may be generalizable to other contexts where the same basic conditions apply.

Tools and resources for implementers

Costs you are likely to encounter include: