The UK Behavioural Insights Team sent text message reminders to debtors who had failed to pay a court-ordered fine. The messages varied in whether the subject’s name and the exact amount of his/her outstanding fine were included.

A personalized text message using the debtor’s name increased the average amount of fines paid by 189 percent, from £4.46 to £12.87.

As of 2007, the UK Ministry of Justice was imposing over £350 million in new court fines annually, only half of which were collected within six months. In 2011, the Ministry faced over £600 million in outstanding unpaid fines.

Her Majesty’s Courts and Tribunal Service (HMCTS), which administers the collection of fines, incurs significant costs from non-compliant debtors. In addition to resources for case-management and follow-up phone calls, bailiffs are assigned to recover the debt directly. As of 2012 there were 580,000 of these bailiff cases each year, which often end up back in court and require further processing.

Researchers from the UK Cabinet Office’s Behavioural Insights Team targeted debtors who failed to pay their court fine on time. All subjects had already received a written notice in the mail warning them that a bailiff could enforce the fine through arrest or seizure of property.

On the Monday after the payment deadline was missed, HMCTS sent subjects a text message. All messages contained the basics: a reminder about delinquency, a warning of a bailiff warrant, a payment hotline number, and a reference number. The messages varied in whether the subject’s name and the exact amount of his/her outstanding fine were included. 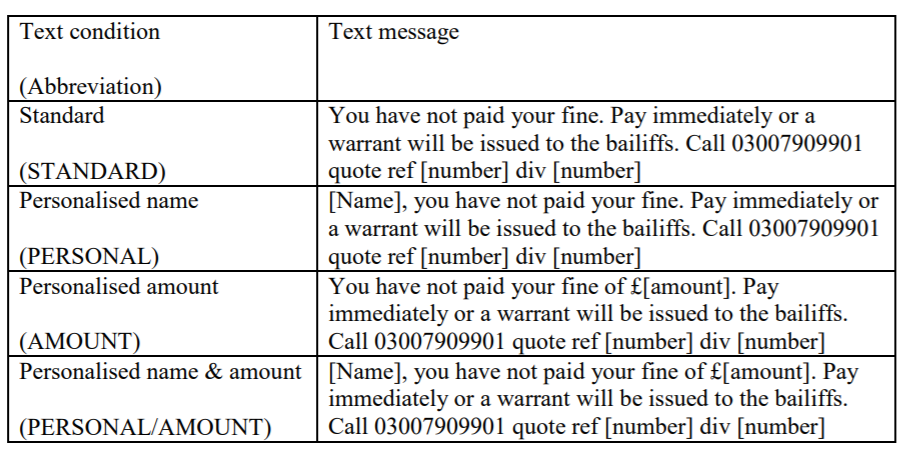 The intervention in early 2012 was implemented in two phases, in three regions of Southeast England. In Phase 1, researchers randomly assigned 1,817 subjects to either receive no message or receive one of the four types of messages. Effectiveness was measured by the average amount paid within seven days. In Phase 2, researchers eliminated the “no message” group to instead focus on comparing the effectiveness of messages that included the specific amount owed and/or the debtor’s name. The second phase involved 3,633 subjects. 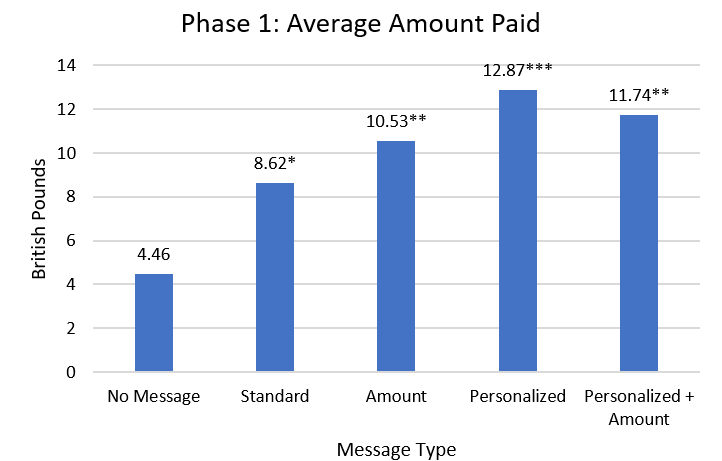 While all text messages effectively increased payments, the researchers found that compared to a standard message with just the core information, a personalized text message increased the average amount of fines paid by 34 percent, from £8.34 to £11.21.