Voting is a public good in that it benefits society and is an important part of a functioning democracy. Yet, many people fail to cast their ballot on election day because the individual benefits from voting are limited. Generally, people contribute more to public goods when their behavior is made more observable to others. However, voting is inherently private: very few people observe whether you actually show up on election day. In addition, existing channels used to encourage people to vote, such as mail or social media, are also inherently private and provide little or no observability. This project’s goal was to build on past get-out-the-vote (GOTV) efforts by creating the perception of observability in communications that encourage people to vote.

Before the 2010 general election, individuals residing in battleground congressional districts with a low to moderate likelihood of voting were targeted by a series of behaviorally informed get-out-the-vote letters.

Some of the unlikely voters received letters containing design elements that have previously been shown to increase voter turnout and are considered get-out-the-vote best practices (sections B-E in sample letter below).

Other unlikely voters received identical letters with “enhanced observability.” The observability in these letters stemmed specifically from the following statement in the top right corner of the page: “You may be called after the election to discuss your experience at the polls” and a paragraph at the bottom of the page reinforcing this message. 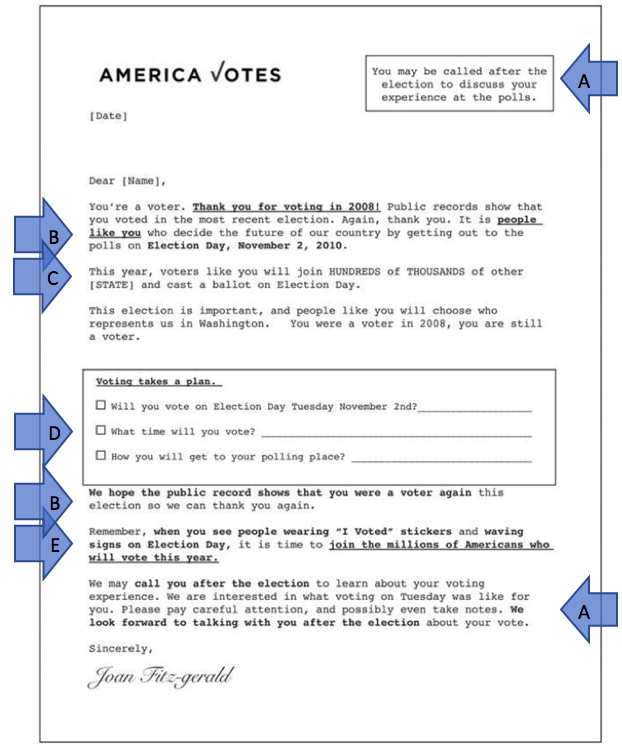 A. Enhanced and reinforced the perceived observability of individuals’ decision to vote

C. Reinforced the civic identity by highlighting that “people like you” will vote

D. Improved implementation intention by having a box in which individuals were to write their voting plans

E. Emphasized the descriptive social norm that many others would vote.

After the election, voter turnout records were compiled from publicly reported administrative records. Elements B-E were present in both the GOTV best practices and enhanced observability letter. Element A was only present in the enhanced observability letter. Element B differed for those who voted in 2008, and those who did not, as noted in the description. 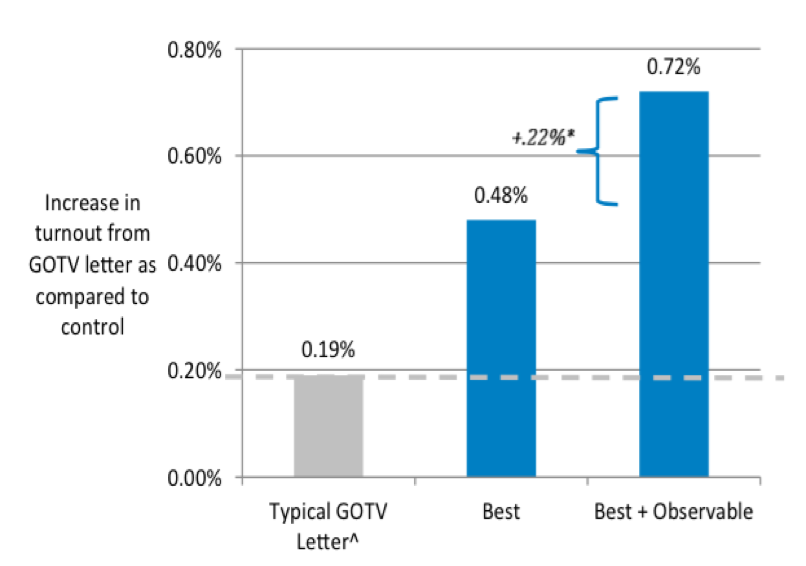 The “typical GOTV” letter effect is estimated from previous interventions

It is important to note that the individuals included in the study had to reside in battleground congressional districts. They also had to be predicted to be politically “progressive” and to have a low-to-moderate likelihood to vote in the 2010 General Election. This resulted in a population that was 60% female, 15% African American, and averaged 43 years of age. All individuals were randomly assigned to one of three conditions.