I Promise Not to Sell My Vote

Voters in the Philippines were asked to promise not to take any money from candidates or their representatives before local elections.

The cost of this program was $8.00 per voter reached.

Vote-buying and vote-selling generate immediate benefits for the individuals engaging in them, but obstruct the democratic process and erode trust between constituents and political institutions. A common approach to curb this practice is to try to convince voters not to sell their votes.

Prior to municipal elections for mayor, vice-mayor, and city council in Sorsogon City, Philippines, researchers showed voters a video clip on a hand-held electronic device.

The clip was part of a voter education campaign that used humor to encourage viewers to turn out to vote, vote for honest and competent candidates, and avoid vote-selling. It featured Mae Paner, a political activist and actress, as the fictional character “Juana Change.”

Screen requesting voters make a promise not to sell their votes.

After the video, voters were shown a screen asking them to make a promise: “Would you promise not to take the money from any candidate or local leader before the elections?” Participants were asked to tap one of two images. Tapping the left image (of a handshake, above the words “Yes, I promise.”) would signify agreement to promise, and tapping the right image (of an open hand in a “halt” signal, above the words “No, I can’t make that promise.”) would indicate refusal to promise.  Participants who agreed to make the promise by tapping on the image of the handshake were then asked, on the next screen, to write the words “I promise” in a blank space using their finger. 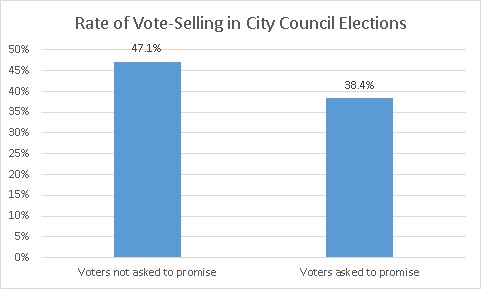 This approach has only been tested in the Philippines in municipal elections. In this context, the research indicates that simply eliciting a promise not to sell votes can reduce vote-selling. Researchers believe that this result may be generalizable to other contexts where the same basic conditions apply:

As with every intervention, effective implementation would also be required for this approach to work elsewhere, and all interventions benefit from rigorous monitoring and evaluation.

Additional Tools and Resources for Implementers

Hello, my name is_____. I am working with Innovations for Poverty Action along with the University of Michigan. We are researching voter education campaigns that can promote civic competence. We are asking you to participate because you are a resident of and a bona fide registered voter in Sorsogon City.

If you agree to be part of the research study, you will be asked to participate in a survey. We will ask questions about your voting behavior in the past and voting intentions for the upcoming May elections. We will also ask you to watch a 3-minute video clip relating to the elections.

While you may not receive a direct benefit from participating in this research, we hope that this study will contribute to improving the efficacy of voter education campaigns and promoting greater civic competence among Filipino.

Are you available to participate in our study?

(If asked) This interview will take approximately 30 minutes. If you do not have time to do the interview right now, we can arrange to come back at a later time.

Eliciting a simple promise not to sell one’s vote can be a remarkably low-cost intervention. Although the original study relied on promises recorded on a handheld electronic device, the use of these devices may not be essential (voters could be asked to record their promise using pen and paper, although this variation has so far not been rigorously evaluated).

The cost per person of the original intervention was roughly $8.00/person using the following assumptions:

Other costs you are likely to encounter include:

For more guidance on implementing this design, click “I want to try this” from the left drop-down menu.