The reminders cost about $0.01 per text message.

Malaria patients undertaking artemisinin-based combination therapies (ACTs) must complete their full, six-dose course of medication over two and a half days to avoid relapse into illness and prevent the development of drug-resistant strains of the disease. However, many people stop taking the drugs once they feel better. There is evidence that P. falciparum, the strain responsible for the majority of deaths in Sub-Saharan Africa, has developed resistance to ACTs in Southeast Asia. Public health experts are deeply concerned that resistance will also develop and spread in Africa, where the parasite has already developed widespread resistance to several classes of antimalarial drugs, leaving ACTs as the only fully effective treatment.

People receiving treatment for malaria received a text message every 12 hours, around breakfast and dinner time, over the course of two and a half days for each of the six doses of ACT. The messages reminded them to take their malaria drugs; they either read “Please take your MALARIA drugs!” or “Please take your MALARIA drugs! Even if you feel better, you must take all the tablets to kill all the malaria.”

Malaria patients were recruited from public and private hospitals, clinics, pharmacies, licensed chemical sellers, and other places where ACTs were legally sold over the counter, and given instructions in how to enroll in a mobile malaria information system. 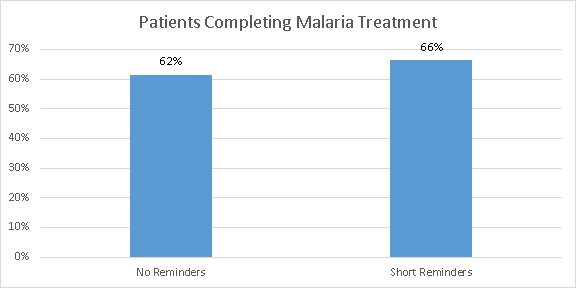 A randomized evaluation found that simple text message reminders increased the number of malaria patients who completed ACT treatment by 5 percentage points: 66.4% completed treatment, relative to 61.5% of those who didn’t receive any reminder messages. Receiving a longer message did not significantly increase adherence.

Adherence was assessed by checking pill packages of ACTs at the patient’s home.

The research team hired a programmer who wrote computer code to randomize delivery of the text messages off of a server, but they encountered technological challenges such as the server not responding and electricity outages in Ghana. Now that the concept has been demonstrated, text reminders could be implemented at scale by working with companies that specialize in text messaging programs. There is one based in Ghana called VOTO Mobile (https://www.votomobile.org/) and another that runs in many countries called Telerivet (https://telerivet.com/). The research team also recommends partnering with the Ministry of Health to make text message reminder programs larger scale and more sustainable.