Registered voters were reminded about upcoming elections via “cold” text messages devoid of any personal contact.

While potential voters may register and intend to vote, many registered voters ultimately do not participate in elections. In addition, previous studies have not addressed how the impact of the text messages may vary among causal voters compared to habitual voters. Casual voters are defined as those who had previously only voted in the presidential election or major elections. Habitual voters are defined as those who have a higher propensity to vote (in this case, those who voted in each of the four elections).

This project aimed to increase voter turnout by sending registered voters “cold” text message reminders about upcoming elections. We define cold texts as text messages that have absolutely no prior or personal contact associated with them. In other words, people do not receive texts from an organization that registered them in person and do not give permission to receive text messages prior to Election Day. This method of voter outreach differs from mobilization efforts that are centered on social contact.

The first part of the project revolved around the November 2009 local elections in San Mateo County, California. We considered this a “low salience” election because of the low visibility, with little advertising or other electioneering activities. Registered voters in the treatment group received a text message at 1PM the Monday before Election Day with the following encouragement:

“A friendly reminder that TOMORROW is Election Day. Democracy depends on citizens like you – so please vote!”

Other voters received nothing at all. 99.8% of the text messages were delivered successfully.

The second part of the project involved higher salience elections: the June 2010 statewide primary elections in San Mateo County. It is considered higher salience because of the higher turnout and advertisement rates. At 1 PM the Monday before Election Day, registered voters in the treatment group received the same text message as the one quoted above. Other voters received nothing at all. 99.99% of all messages were delivered successfully.

In addition, we found that in the low salience election, the “cold” text messages were most effective among habitual voters. Among casual voters, the text messages had little effect in this experiment. 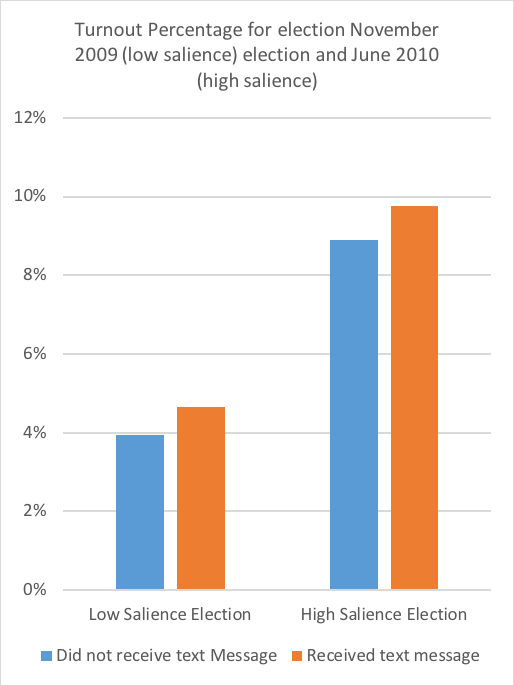