When, Where, How: Planning to Vote

Days before the 2008 presidential election, unlikely voters received phone calls in which they were encouraged to vote and prompted to plan their visit to the polling station.

The project’s goal was to increase voter turnout among potential voters: registered voters who participated in one or fewer primary elections since 2000. Voting is a high-salience, socially important behavior that is essential to a functioning democratic society. While campaigns and organizations spend millions of dollars to increase voter turnout, recent research  suggests that simple interventions like facilitating plan-making can help people follow through on their intentions.

In the days before the 2008 presidential election, a professional firm contacted a sample of unlikely voters in Pennsylvania by telephone. Callers communicated with individual voters using  an implementation-intention script that included a reminder about the upcoming election and also asked three follow-up questions to facilitate plan making. The follow-up questions asked individuals to indicate the time at which they would vote, where they would be going to the polling station from, and what they would be doing before going to vote. Researchers believe that articulating the when, where, and how of following through on an intention creates cognitive links between an anticipated future situation and the intended behavior. 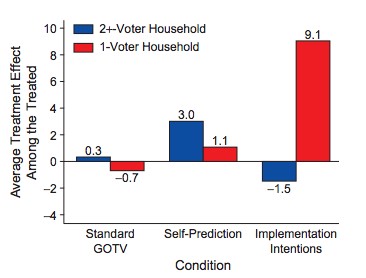 A randomized evaluation found that asking voters about their intention to vote and prompting them to form voting plans increased overall voter turnout by 0.9 percentage points, from 42.9% to 43.8%. However, among the 23% of targeted households that were successfully contacted over the phone, turnout increased by 4.1 percentage points

Voting can be time-consuming and require coordination among members of a household. The implementation-intentions script may have been rendered impotent in multiple-voter households because voters who live together may be more likely to make voting plans organically than those who live alone. Supporting this hypothesis, this study found that individuals in single-voter households were less likely to have made voting plans before receiving a phone call.

For more guidance on implementing this design, select “I want to try this” from the left drop-down menu.