Performance-based certificates were offered either publicly or privately to volunteers in a BRAC tutoring program in Bangladesh, and their effects on tutor retention and performance were tested.

When volunteers are offered a public recognition incentive, dropout rates increase by 22% (from 20.5% to 25%); however, average student performance on standardized tests improves by 7.2% as remaining volunteers are more motivated to perform.

BRAC introduced the Chhatrabandhu (CB) volunteer tutor program in 2007. CBs provide free after-school tutoring to disadvantaged secondary school students in rural Bangladesh to help improve their educational outcomes. The challenge to BRAC is to ensure that CBs do not drop out of the program early and enable students to perform well academically. Ensuring the retention and the performance of volunteers is a challenge many volunteer organizations face.

One popular strategy to help retain effective volunteers is to use awards, certificates, and public recognition. However, such strategies may not necessarily improve the retention of CBs and students’ performance, because the motivations for volunteering are likely to differ across individuals. Some people may volunteer because they are altruistic, while some may volunteer because the experience may improve their career prospects. Volunteering may also help their social reputation, as volunteers are seen as altruistic and public spirited. The use of non-financial incentives may backfire on the retention of image-concerned volunteers, if they are also motivated by altruistic and career reasons, because the rewards cast doubt on their true motive for volunteering. On the other hand, these incentives may improve performance, if volunteers are not motivated by altruistic reasons and have no concern about misperception.

As of 2015 there were 4,162 CBs who provide free after-school tutoring in mathematics and English to more than 5,000 underprivileged secondary students in 495 schools across 45 districts in Bangladesh. In collaboration with BRAC, schools were randomly assigned into one of three groups:

Performance-contingent public-recognition award: CBs are offered a “superior certificate” in a public ceremony to be held at the end of the two-year program if their students experience achievement gains above a certain threshold. If they do not meet the performance criteria, volunteers are instead awarded a certificate of appreciation (“regular certificate”) in private.

Performance-contingent private-recognition award: CBs are offered the same types of certificates as above, but the superior certificates are also awarded privately.

Participation-based award: CBs are only offered a regular certificate of appreciation upon program completion, regardless of their students’ performance. This is BRAC’s current policy for volunteer recognition.

CBs were informed of their assignment after they had started volunteering. All CBs received formal letters explaining the incentives they were offered and were unaware of the other group conditions. To study the impact of the varying recognition, we collected information about the dropout status of CBs before performance was measured and revealed. We conducted standardized tests to measure performance of students in mathematics and English and also collected information about their performance in public and in-school exams. 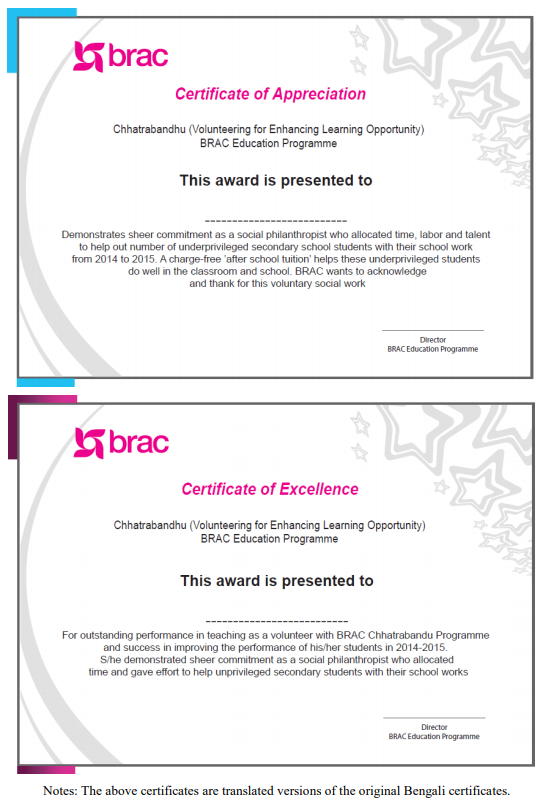 Offering the performance-based superior certificate actually increases the dropout rate of volunteer tutors during the program period by 22 percent when it will be given publicly (from 20.5 percent to 25 percent), but not when it will be given privately (Figure 1). This backfire effect on retention is particularly acute for CBs whose survey responses indicate high altruistic and career motives for volunteering (from 19 percent to 27 percent), and when they are also high-achieving the drop-out rates nearly double (from 17 percent to 32 percent). Thus, the backfire effect is strongest among CBs whom BRAC typically aims to attract and retain.

Thus, using public-recognition rewards as incentives may discourage the type of individuals that volunteer organizations are most seeking, while motivating low-achieving volunteers to deliver stronger performance, if the incentive may benefit their career and social reputation. 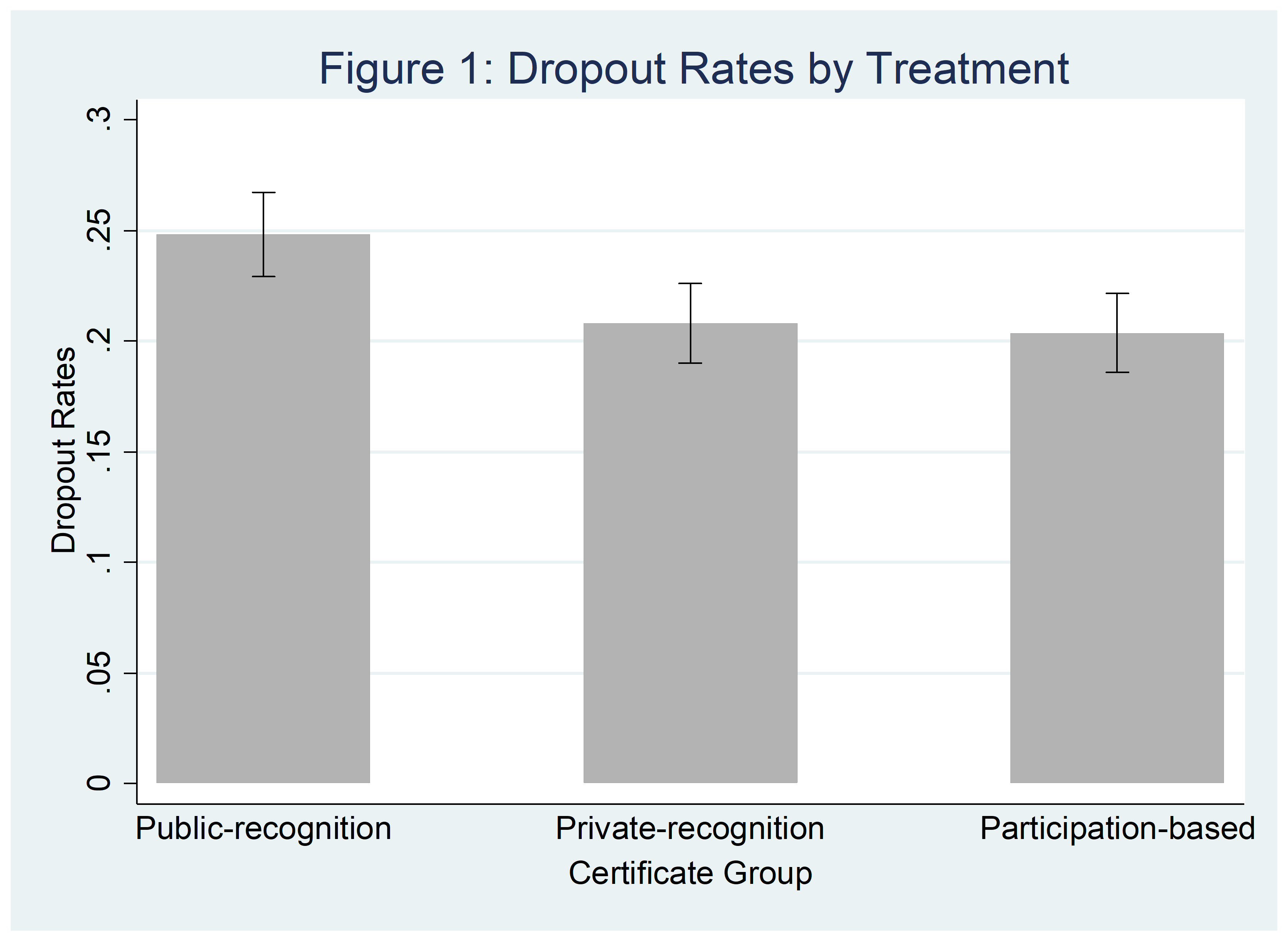 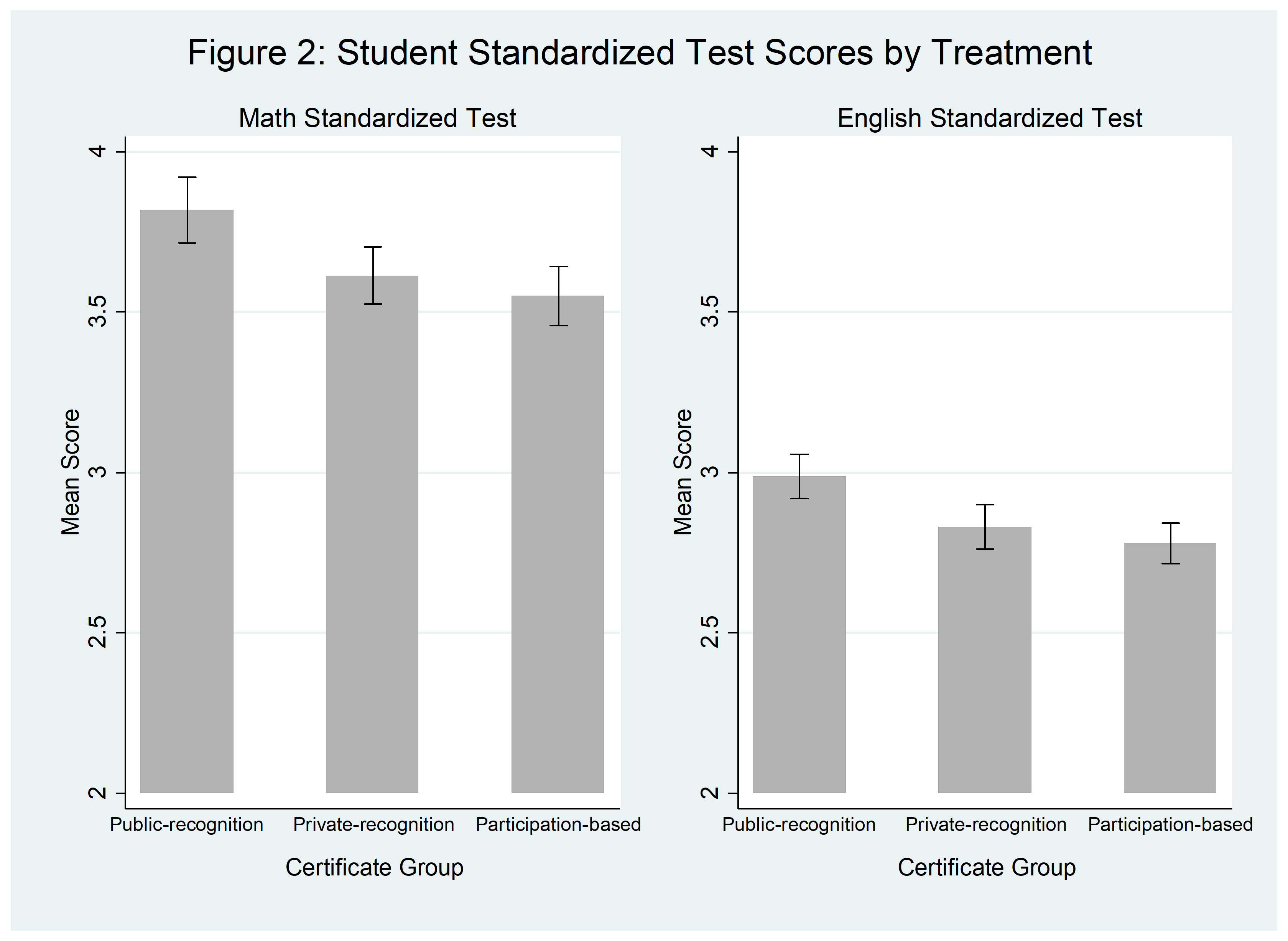